Amazon Astro review: so far, This robot Is actually less creepy than Alexa According to cnet.com, David Priest  said that Amazon Astro -- the first mainstream home robot -- was being delivered to his home for a couple of weeks of testing, there has been one question that literally kept him up at night: How do you review a robot?

But reviewing the $1,000 Amazon Astro is what I plan to do over the next two weeks, testing if it lives up to Amazon's own marketing promises -- and finding out what else it can do. What exactly does that include? Everything from delivering drinks from room to room (yes, even the bathroom, I discovered), entertaining the kiddos (my favorite discovery so far is asking Astro to act like a bird), answering questions with Alexa, patrolling your home while you're away and much more. Plus it works with other devices and services, like the Ring Alarm Pro and Alexa Guard. In short, I've got a lot to test.

Astro landed on Friday, an unseasonably chilly and drizzly day in my home state of Kentucky, and I brought it to the CNET Smart Home to set it up and begin playing around with it.

The future is here, and we're along for the ride.

Thinking outside the box

I've reviewed a dozen or so Amazon devices in recent years, and my first impression when I pulled Astro out of its box was that it looks a lot like an Echo Show 10, Amazon's swiveling smart display, set on wheels. The reason: The screen is nearly identical, at 10.1 inches in size with 1,280x800-pixel resolution.

But that impression is shattered as soon as Astro wakes up and begins rolling around to map your house for navigation, angling its screen and winking its animated eyes like a real-life Wall-E. Unlike Echo devices, Astro's main form of communication is nonverbal, and after just a short time with the bot, that decision feels like the right one for Amazon to make. Even after years of development, Alexa's voice seems colder and more artificial than Astro's beeps and purrs -- something George Lucas anticipated decades ago with R2-D2.

If I were to guess, I think this approach will make the robot the subject of a lot more affection in households across the country than Alexa. Why? Well, Astro is rolling back from the uncanny valley where Alexa and other voice assistants have settled, opting instead for a less human, more furry-friend type of vibe. That makes it less threatening and a whole lot more fun.

Alexa still features in Astro's design, especially if you ask it questions that necessitate verbal answers. In that case Alexa, more disembodied than ever, issuing from the much more playful bot zooming around your kitchen, will offer its usual answers.

But again, after just a few hours of asking Astro to sing, beatbox and act like a bird, it's clear that this is much more than an Echo on wheels. It very much has a personality of its own.

If Astro isn't a mobile Alexa, what is it?

It can recognize, find and follow people; it can partner with Ring Alarm Pro home security to patrol your house for intruders; it can work with a smart pet cam to fire treats at your dog; it can play music and shows on its display; it can tote various beverages around the house in the built-in cup holders on its back; and it can charge your phone in the station underneath those holders. In short, Astro is meant to be a little factotum, zooming around your house, and helping accomplish various odds and ends.

But despite all those features, I still wonder if Astro is a bit of a solution in search of a problem. None of these features, cool as they are, feel particularly vital to me. In fact, the lack of a built-in vacuum feels like a bit of a missed opportunity here, since that's a practical way Astro could genuinely help around the house.

Instead, like all cute animals instinctively do, Astro seems to rely on its magnetism to distract from its impracticality. I've already described it as playful, and this weekend, when my kids get their hands on it, I'd be willing to bet a month's salary that my 4-year-old will call it cute within the first 10 minutes.

How helpful Astro's winks and nods actually are remains to be seen, but I can tell my kids (and my parents, too, probably) will much prefer chatting with this cute little curio than repeating the same phrase to Alexa over and over to steadily worsening results.

But the cuteness belies something more serious: a lot of hardware for watching and listening inside your home. That includes a 5-megapixel bezel camera on the screen, a dual-camera periscope with 12- and 5-megapixel cameras, and an array of microphones that anyone with an Echo device will recognize. You can switch all of these off with a button press, but to use the device, you really need to trust that all its footage and processing stays local -- which Amazon says is the case. Amazon's little robot has wheels, so it definitely can't go up or down stairs (well, I guess it could go down, but I doubt it would survive the trip). But I'm still surprised by how mobile the bot is, driving onto thick-pile rugs and across small floor transitions without much trouble.

But Astro isn't perfect: The robot struggled to map the first floor of the CNET Smart Home twice. After jumping on a series of phone calls with an Amazon rep, it seemed a number of issues were contributing to the problems. Either the wood floors were too shiny, or the windows near the docking station were interfering with Astro's ability to locate itself, or the exposed stairway in the living room was confusing the robot.

To get past the problem, we blocked windows and covered the exposed staircase with cardboard -- and Astro successfully mapped the floor.

This whole process is accomplished thanks to its array of cameras, but also by Astro using deep learning to quickly map and remember the layout of your home. I'll have to test this more thoroughly in the coming weeks, but my first impressions here are mixed. Once Astro had successfully mapped the house, it worked really well. But the mapping process was a pain, because Astro simply isn't designed to deal with a wide range of architectural features. 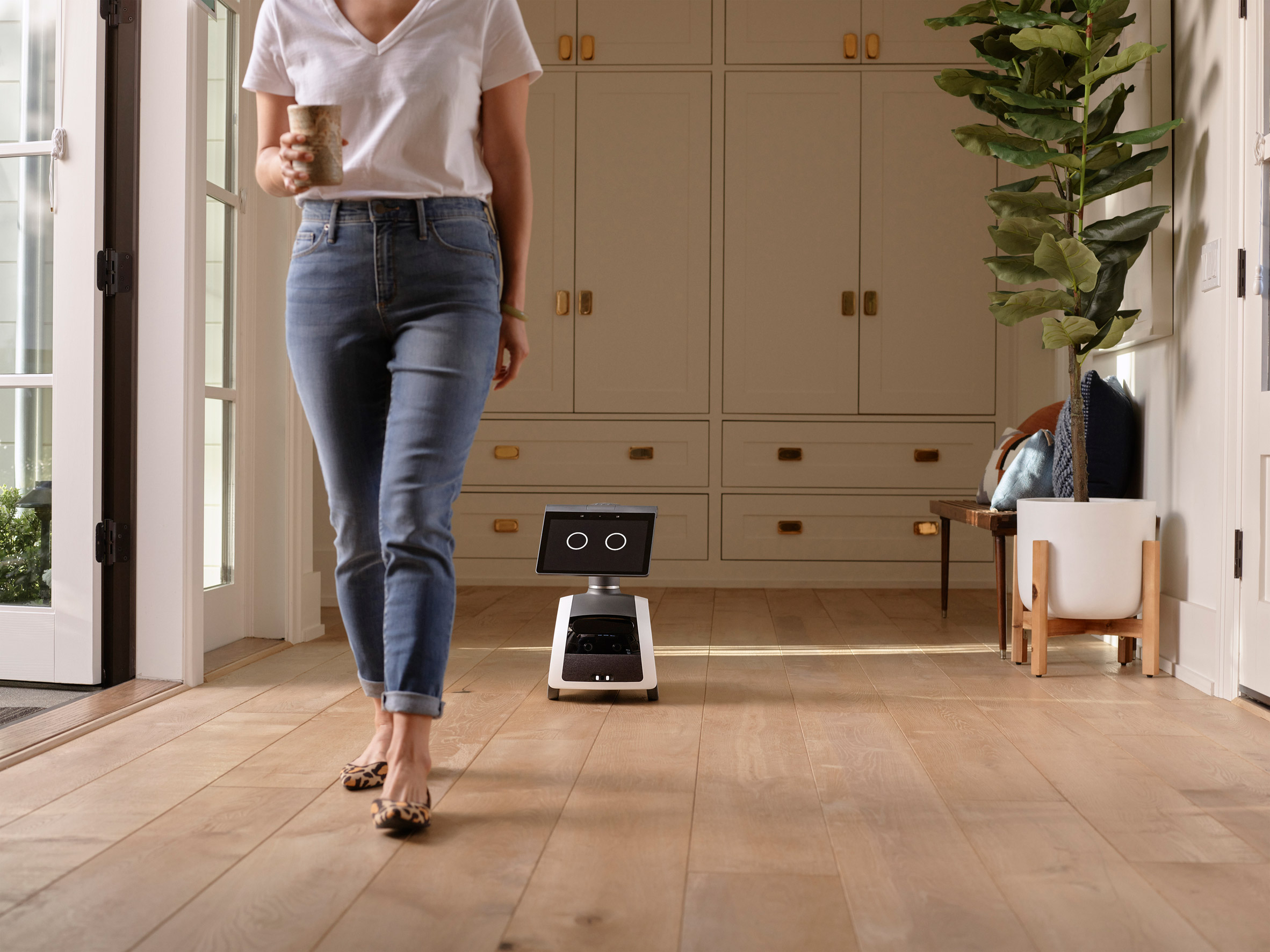 Once Astro has mapped your house successfully, you can take a tour with the little robot, stopping in each room and telling it the names. I had to shift a couple of boundaries in the app, but for the most part, Astro had effectively mapped the house -- and it continues to navigate it without issue.

I also have yet to test the privacy features here. After Astro maps your home, you can block off certain rooms in the app, so it won't follow you there (think: bathrooms). Again, I'm looking forward to testing the reliability of these features -- but I think in theory it's a good safety measure to have.