Pakistan Cricket Board has put together a dynamic commentary panel for the historic seven T20 Internationals between Pakistan and England.

Renowned commentators David Gower and Mark Butcher from England, and Pakistan’s cricket legends Wasim Akram, Waqar Younis, Aamir Sohail, Bazid Khan and Urooj Mumtaz will commentate on the seven games to be played across Karachi and Lahore from 20 September until 2 October.

Throughout the series, these pundits will also provide insights in pre- and post-match shows to be hosted by famed presenter Zainab Abbas.

As the board continues its efforts to enhance the TV viewership experience for Pakistan Cricket fans across the world, Spidercam will be used to bring fascinating and captivating images for the first time in an international series in Pakistan from the seven T20Is. 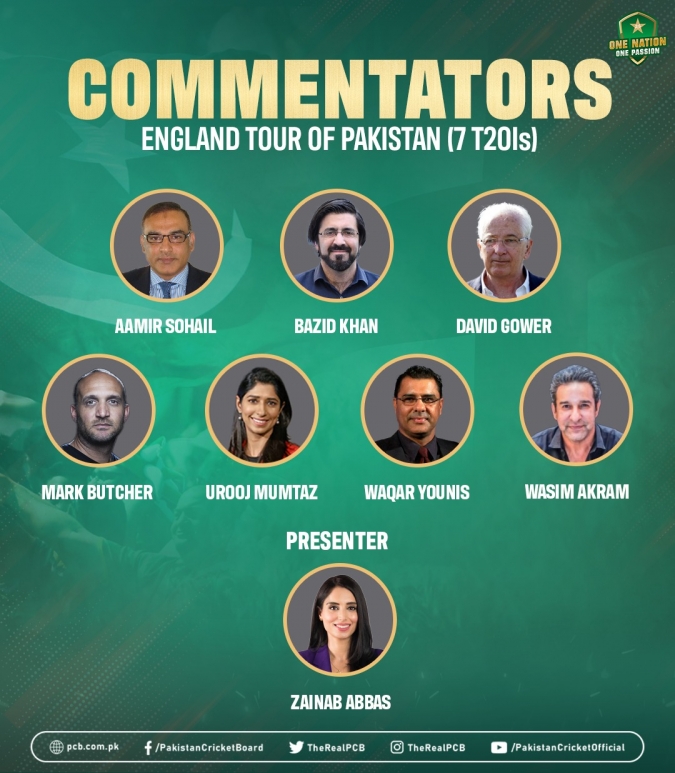 The production will be done through 28 full High-Definition cameras – including Buggy and Drone cameras. The production will also include a comprehensive Hawkeye set-up – UltraMotion ball-tracking and UltraEdge to further enhance and aid Decision Review System.

The series marks the return of the England men’s side to Pakistan after a gap of 17 years and the broadcast of this much-anticipated series will be available through PTV Sports on Linear TV and ARY Zap on livestreaming within Pakistan; Etisalat (Middle-East and North Africa), Flow Sports (Caribbean), Sky NZ (New Zealand), Fox Sports (Australia), Sky Sports (United Kingdom), Sony (South Asia outside Pakistan), Super Sports (Sub-Saharan Africa) and Willow TV (North America). BBC Sport (United Kingdom) and FM 106.2 (Pakistan) will be radio partners for the series.